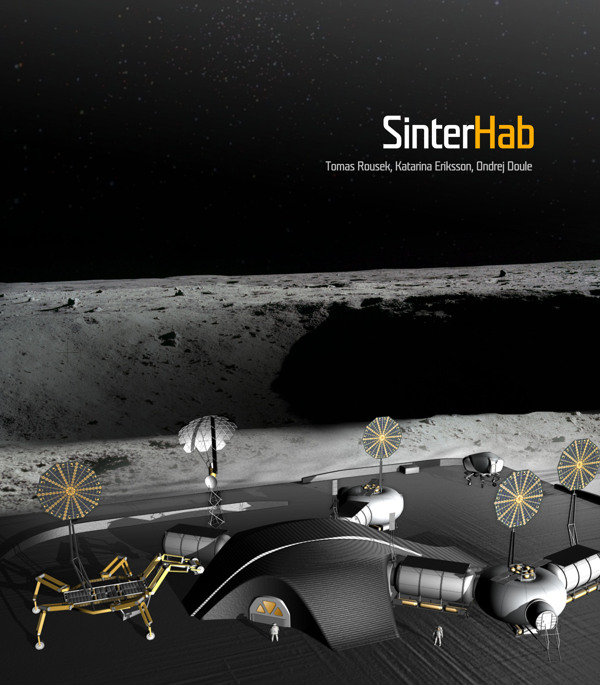 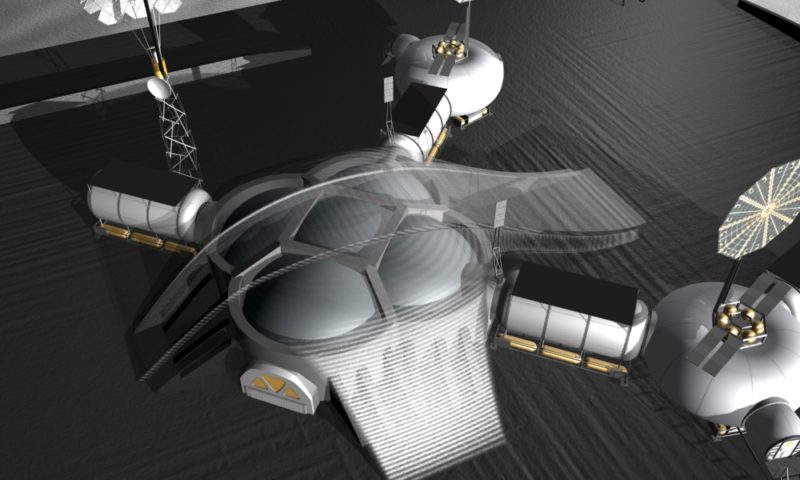 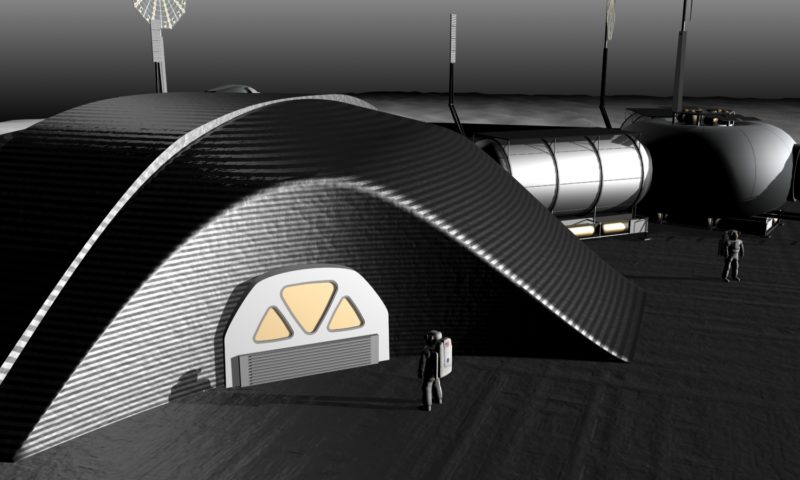 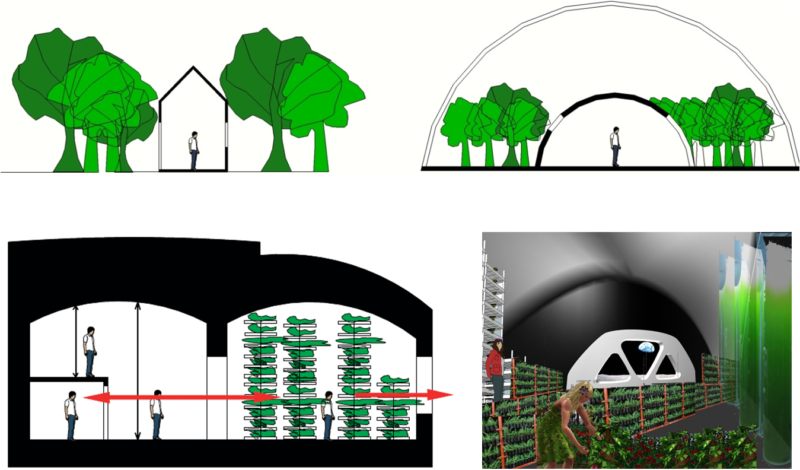 The 3D-printed Moon base concept SinterHab envisions an outpost baked from lunar dust near the Shackleton crater. Modules would be constructed from lunar soil by microwave sintering and contour crafting making use of NASA JPL robotics system.

This was a student project made together with space architects Tomáš Rousek and Ondrej Doule at International Space University 2010. Presented at IAC 2010, published in Acta Astronautica 2011. Find the Sinterhab abstract here and download the full SinterHab paper from Science Direct here.

Imagine that you took the solar energy and the dust from the ground and baked the dust using microwaves to directly construct any shape you wanted. On Earth it would sound like science fiction but on the Moon it would be feasible due to the unique properties of the lunar soil and the absence of anatmosphere. Microwave sintering creates a solid building material similar to ceramics, purely by microwave heating of the dust. Robots equipped with this technology could bake the lunar dust without any glue brought from Earth.

Due to the nano-sized iron particles in the lunar dust produced by space weathering, it is possible to heat the dust up to 1200 – 1500 0C and melt it even in a domestic microwave oven. When the lunar dust (regolith) is heated and the temperature is maintained below the melting point, particles bond together and the building blocks for the lunar habitat can be created. In the future, we could build structures of entire cities on the surface of the Moon by using solar energy. We can significantly decrease mass, costs and environmental impact if we don’t need to send glue or other binding agents from Earth. Furthermore, the hardening of the surrounding surface of the base would help mitigate the hazards of contamination from lunar dust, which is highly abrasive and harmful to both astronauts and equipment.

An innovative internal membrane system of SinterHab offers a module volume up to four times l than of the classic rigid modules at the same weight shipped from Earth. Nature provides inspiration for the inflatable structures in the form of foam bubbles. The intention of building several compartments with sintered walls led to a design based on the geometry of bubbles, where the forces of neighbouring bubbles are in equilibrium and enable the building of flat walls. It would be possible to make the modules large enough to accommodate  even a green garden that recycles air and water for the lunar outpost. An architecturally integrated bioregenerative life support system does not only provide for the mere survival of the astronauts, but contributes to a higher level of habitability, enhancing the comfort and psychological well-being of the inhabitants.
The radiation shielding is provided by regolith structure, polymer layers of inflatable membrane and water tanks in critical places.

Project SinterHab was initiated at the International Space University by space architects Tomas Rousek, Katarina Eriksson and Dr. Ondrej Doule in collaboration with Richard Rieber from NASA JPL in 2009. London-based space architect Tomas Rousek, director of A-ETC.net, then carried out an internship with the NASA Habitation team at NASA JPL in Los Angeles where he worked with Scott Howe, a co-author of this 3D printing robotics system. The design of SinterHab was then presented to the scientific community in the leading aerospace journal Acta Astronautica in 2012. Scientists from NASA JPL have used SinterHab as an example in proposal for funding the development of this microwave sintering technology.

This project describes a design study for a core module on a Lunar South Pole outpost, constructed by 3D printing technology with the use of in-situ resources and equipped with a bio-regenerative life support system. The module would be a hybrid of CLASS II and III structures, combining deployable membrane structures and pre-integrated rigid elements with a sintered regolith shell for enhanced radiation and micrometeorite shielding. The closed loop ecological system would support a sustainable presence on the Moon with particular focus on research activities. The core module accommodates from four to eight people, and provides laboratories as a test bed for development of new lunar technologies directly in the environment where they will be used. SinterHab also includes an experimental garden for development of new bio-regenerative life support system elements. The project explores these various concepts from an architectural point-of-view particularly, as they constitute the building, construction and interior elements. The construction method for SinterHab is based on contour crafting by sintering of the lunar regolith. Sinterator robotics 3D printing technology developed at NASA JPL enables construction of future generations of large lunar settlements with little imported material and the use of solar energy. The regolith is processed, placed and sintered by a the Sinterator robotics system which combines the NASA ATHLETE and the Chariot remotely controlled rovers. Microwave sintering creates a rigid structure in the form of walls, vaults and other architectural elements. The interior is coated with a layer of inflatable membranes derived from the TransHab project. The life-support system is mainly bio-regenerative and several parts of the system are intrinsically multifunctional and serve more than one purpose. The plants for food production are also an efficient part of atmosphere revitalization and water treatment. Moreover, the plants will be used as a “winter garden” for psychological and recreational purposes. The water in the revitalization system has a multifunctional use, as radiation shielding in the safe-haven habitat core. The garden module creates an artificial outdoor environment mitigating the notion of confinement on the lunar surface. Fiber optics systems and plasma lamps are used for transmission of natural and artificial light into the interior.